Beyond the Frame: Inland Bounty 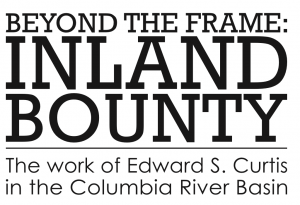 From 1907 to 1930 photographer Edward S. Curtis took on the colossal task of documenting the remaining intact Native American tribes of the American West. 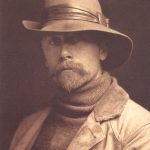 The resulting portfolio, The North American Indian, contains twenty volumes of photographs and ethnographic text. The Wenatchee Valley Museum and Cultural Center will recognize the 150th anniversary of Edward Curtis’ birth by presenting an exhibition displaying images selected from Volumes 7 and 8 of Curtis’ portfolio along with interpretive text panels, an exhibit guide and relevant displays on loan from private collections. The images used in this exhibit have been graciously provided by the Seattle Public Library.

There will be eight programs held to accompany this exhibit including an opening ceremony with a salmon feast, scholarly talks, a film screening and a closing ceremony.

Join Native American elder Randy Lewis for a traditional blessing of water and salmon at the opening of the Edward S. Curtis exhibit. One of the Plateau tribes’ most significant ceremonies is the First Salmon Feast, marking the arrival of salmon to traditional fishing grounds. Lewis will retell origin stories related to the Creator’s calling of a grand council of the plants and animals to help feed and care for the newest of creations: humans. Following a prayer of thanksgiving, guests are invited to participate in a feast of salmon, part of the traditional tribal religion in the Columbia Basin that reinforces the central role salmon and water play for Columbia Basin tribal people. Lewis is the great-great grandson of Sam Miller, founder of the Miller-Freer Trading Post, the anchor to the original City of Wenatchee.

While Edward Curtis’ mission was to document the lives of American Indians, Wenatchee’s own Columbia River Archaeological Society focused on a singular island, destined to disappear behind the Columbia’s first dam in 1931.  Rock Island rapids was one of the great fisheries of the Columbia – a place of deafening sound that shook you to the bone.  To Native Peoples, the island was and remains holy, made sacred by generations of Ancestors who traveled across the river’s swift channels to seek life-altering visions.

Join William Layman and Randy Lewis to watch Rock Island re-emerge before your eyes, through Layman’s use of photographs, maps and narratives that allow viewers to walk the island’s contours and see its many petroglyphs and other interesting island features. Lewis’ commentary will shed light on how Native Americans knew the island and how they regard it presently.  The rewards are great; offering new ground that gives regional residents, Indian and non-Indian alike, the ability to more deeply appreciate and inhabit this extraordinary river we call home.

This co-led presentation is designed to engage both heart and mind.

William Layman has actively been reflecting and contemplating the island, its rapids and petroglyphs since moving to Wenatchee in 1979. His research is informed by long-standing relationships with Native Elders, who through his work are able to better know the original free-flowing river.  In 2008 Layman co-curated WVMCC’s exhibit, River of Memory: The Everlasting Columbia which traveled throughout the Pacific Northwest and was featured by the Royal British Columbia Museum and the Washington State Historical Society.

Randy Lewis (Wenatchi/P’Squosa)  holds a vast storehouse of oral tradition that chronicles the stories of Indian people living in the Mid-Columbia region. Beyond, Lewis is a highly celebrated organizer and leader of Pacific Northwest tribes who for years has been at the forefront of speaking for and empowering larger PNW Indian communities. Randy’s words are often highly entertaining but beneath them resides a serious and caring heart that knows well the cultural trauma suffered by his people. The specific knowledge he shares about Rock Island reflects his close boyhood relationship with his teacher/grandfather, Jerome Miller, who fished the island’s banks and passed the knowledge and responsibility of Rock Island’s stories over to his grandson. Program is free and open to the public. A $5 donation is requested. Light refreshments will be provided along with a no-host wine bar.

The museum will host an all-day weaving workshop (9 a.m. to 3:30 p.m.) featuring the versatile tule, or bulrush, as raw material to create a sitting mat that can be used for yoga, picnics or even as an insulating layer on the dining room table. Wanapum tribal elders skilled in the art of tule weaving lead the class.

Historically, the Wanapum, or River People, created houses out of mats made from the tall reed that grows abundantly in local ponds, springs and sloughs. The mats were used to cover winter log houses and summer tepees as well as mattresses, table mats, ceremonial sitting mats and burial mats.

The tule plant’s unique Styrofoam-like core makes an excellent insulating material and was used by Columbia Plateau indigenous peoples for hundreds of years as a natural air-conditioning system. The plant swelled with moisture during rainy, wet times to seal gaps in the mats and form an insulating roof. On hot, dry days the reeds in the mats would shrink allowing cooling breezes to filter into the lodging.

Sign up for this workshop to learn from the Wanapum people how to make a basic tule mat. All materials are provided and all skill levels are welcomed. Cost is $100.

Respected Native American historian E. Richard Hart talks about the current status of Wenatchi Fishing Rights on the Wenatchee River. The evening includes a screening of the newly updated False Promises, a film documenting the history of events leading to the Yakima Treaty of 1855 and the Wenatchi Band’s quest for the fulfillment of treaty rights. The film is based on the research of Hart, who draws on more than 30 years’ experience in tribal issues. Through interviews with Hart and living tribal members, archival photographs and the words of the last Wenatchi chief, Chief John Harmelt, the Wenatchi people are vividly brought to life.

“Our Wenatchi Reservation was taken from us in 1894. Our hunting and fishing rights were also taken at that time, against our wishes. Many of our tribesmen are scattered in various parts of the State of Washington where the land is poor … We, the Wenatchi Indians, wish to have our fishing and hunting rights restored to us in the Wenatchee Valley and forests.” Chief John Harmelt, 1933

False Promises makes an impassioned plea for the return of the land that was taken from the Wenatchi band and an honoring of the promises made in the 1855 Yakima Treaty.

A $5 donation is requested at the door. Light refreshments will be available along with a no-host wine bar.

Native Foods Emily Washines, Yakama tribal member and scholar, talks about the intrinsic link between culture and food and the heartbreaking consequences to a community when those links to the past are broken

Washines is a member of the Central Washington University board of trustees and president of the Yakima Environmental Learning Foundation. She is a lifelong learner of Ichiskiin Sinwit, the Yakama language. Her published documents include: “Natural Restoration and Cultural Knowledge of the Yakama Nation” and “Indigenous Rights, Water and Development: The Skokomish and the Yakamas.”

Washines has presented before the National Social Science Association, Young Women’s Health Summit, Substance Abuse and Mental Health Services Administration and the third National Conference on Women. She is a frequent panel member, speaker and volunteer for numerous organizations across the Pacific Northwest.

With more than 20 years of broadcast and video experience, she serves as president of – and coordinates a yearly film series for – the Yakima Environmental Learning Foundation. Recently, Washines launched a native lifestyle empowerment business “Native Friends,” which focuses on language, history, culture and providing parenting resources.

A $5 donation is requested at the door. Light refreshments will be available along with a no-host wine bar.

Rex Buck, Jr., 61, chief of the Priest Rapids Band of the Wanapum, discusses the impact of displacement on his tribe and his hope for renewed connections to the land among future generations of Wanapum Indians in this hour-long talk and slide show. Buck grew up near the Manhattan Project site at Hanford along the Columbia River. When the U.S. government selected Hanford as a site for plutonium production, Buck and the rest of the Wanapum tribes were forced off their land. Upriver at the last village, which contains 11 buildings in the shadow of the Priest Rapids Dam, the few surviving Wanapum people wait to see what will happen as they cope with the tremendous cultural change brought by displacement. Buck explains how the Wanapum’s continued connection to a portion of their homeland has helped to preserve centuries-old cultural traditions including their strongest belief: That Priest Rapids is a special, sacred place. A place that the Wanapum people must protect and preserve for future generations. A $5 donation is requested at the door. Light refreshments will be available along with a no-host wine bar.

Washington State University Associate Professor of Art History and Fine Arts Michael Hollman takes a critical look at the differing visions of Native American life as portrayed in the turn-of-the-century images of Seattle’s Edward S. Curtis and Okanogan’s Frank S. Matsura. Holloman is the former director of Plateau Cultural Studies at the Northwest Museum of Art and Culture. He contributed to “Indian Summers – The Nespelem Art Colony 1937-1941 on KSPS Public Television, Spokane. His selected exhibitions and group shows include “SGigialtx @20: Building Upon the Past, Visioning the Future, Longhouse Education and Cultural Center, 20th Anniversary Exhibition” at The Evergreen State College in Olympia; “Not Vanishing” Contemporary Expressions of Indigenous Art, 1977-2015, Museum of Northwest Art, LaConner; and “Terrain: Plateau Native Art & Poetry” (Contemporary American Indian Prints) The Evergreen State College Gallery, Olympia (2014). The event is free and open to the public, but a $5 donation is requested at the door. Light refreshments will be available along with a no-host wine bar.

Sharing traditions of dance, song, regalia and percussion – Lewis and the Blue Sunset Singers close out the Edward S. Curtis exhibit with a message of hope for the future of cultural retention. Where Curtis’ images reflect fading traditions on the way to outright extinction, the vast oral tradition knowledge-sharing by Lewis and the performances of the Blue Sunset Singers are living examples of the resiliency of Columbia Plateau indigenous peoples determined to preserve ancient cultural traditions. Evening is free and open to the public. Light snacks will be served.