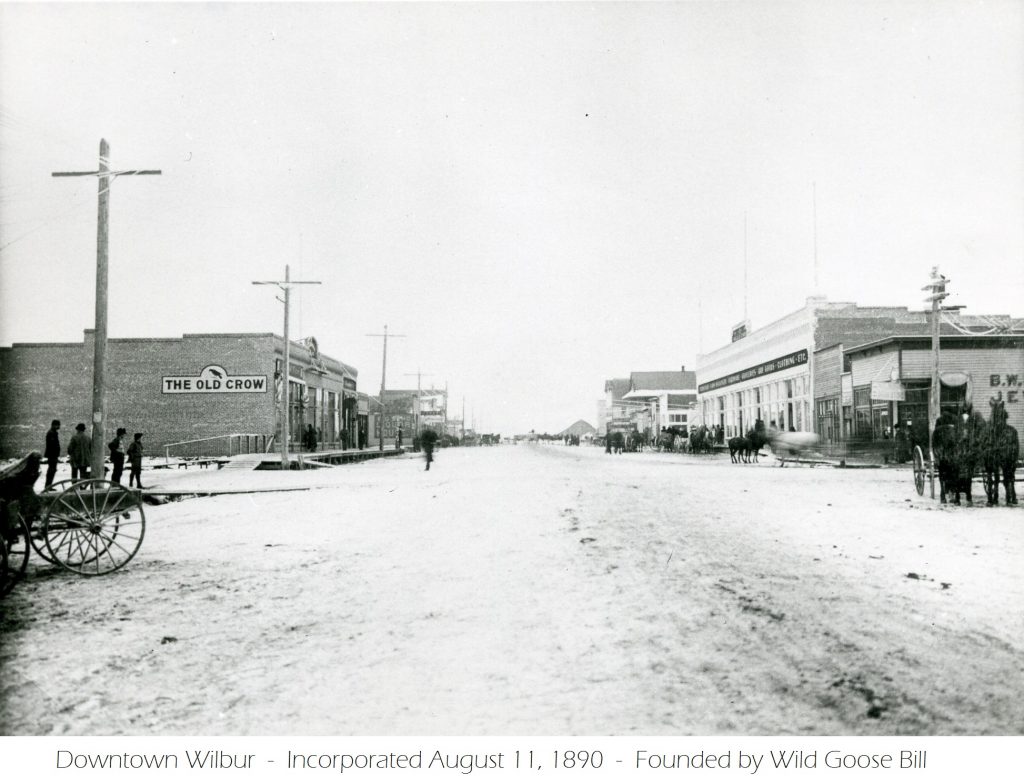 The Story of Wild Goose Bill

Written by
Ken Cramer
WVMCC Board Member and Collections Volunteer

Many characters came to North Central Washington during the 1870’s; Samuel Wilbur Condon aka “Wild Goose Bill” certainly stands out among them. These early West stories have been handed down through the years, the accounts may not be completely accurate.

Born in New Jersey around 1835, Bill migrated west as a young man where he became a packer and mule skinner hauling freight in and around Walla Walla, WA during the 1850s and 60s. Bill established a trading post around 1870 and was the first known settler to live at what is now known as Wilbur, WA.

By now you are probably wondering how Wild Goose Bill got his name. During his early mule skinning days, Bill was out hunting and spied a flock of wild geese. What he didn’t know, was a Native American woman had found goose eggs and had her chicken hens set on them for hatching. When the woman heard a shot fired at her geese she came running and swearing in the Chinook language, threatening to shoot Bill as he was running for his life. From then on he was known as “Wild Goose Bill”. Bill eventually established a primitive ferry system on the Columbia River consisting of a fleet of canoes and trading post for miners prospecting in North Central Washington. He married a local Native American woman which created a problem for the local tribe members. The tribe sent four men to bring the woman back to the tribe, but they were never seen again. Bill’s horse herd grew by four shortly after the disappearance of the four tribesmen.

On another occasion, while Bill was driving his freight wagon, two tribe members were following for many hours. This annoyed Wild Goose Bill, so he calmly stopped the freight wagon, reached for his 30/30 rifle and shot both of them from their horses, adding two more horses to Bill’s herd.

Through the years, the Columbia Ferry system grew to more modern ferries and Bill’s trading post became very profitable. After his first wife left him in 1893, Bill wanted someone to look after his house, so he hired a young woman by the name of Millie (who had two previous husbands) for the job. Well Bill subsequently fell in love with her along with several other local men. There was a big age difference between Millie and Wild Goose Bill, but he wanted to marry her. Millie had other plans and wanted to marry a younger man named Jack. Eventually, Millie left with Jack to another community miles away. Wild Goose Bill would not stand for that, so he headed out during a winter snowstorm, unaware that bad news travels fast.

Wild Goose Bill wrote a will shortly before leaving to fetch Millie. In his will he stated: “If I am killed before returning home, I shall die with my boots on, and I want to be buried in the sand pit below my ferry business”.

Ken Cramer is a Wenatchee Valley Museum Board Member and regular volunteer in the museum Collections Department. As Ken and his wife, Bev, work through the reference files that have been collected over the past several decades, they come across many interesting stories. Ken is writing these blog posts to share some of these stories with others.